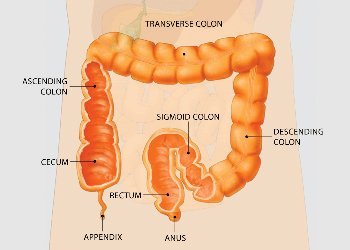 In a colonoscopy, the physician passes the endoscope through your rectum and into the colon to examine the tissue of the colon wall for abnormalities such as polyps.

What is a colonoscopy?

Colonoscopy lets your doctor examine the lining of your large intestine (colon) for abnormalities by inserting a thin flexible tube, as thick as your finger, into your anus and slowly advancing it into the rectum and colon. This instrument, called a colonoscope, has its own lens and light source and it allows your doctor to view images on a video monitor.

Why is colonoscopy recommended?

Colonoscopy may be recommended as a screening test for colorectal cancer. Colorectal cancer is the third leading cause of cancer deaths in the United States. Annually, approximately 150,000 new cases of colorectal cancer are diagnosed in the United States and 50,000 people die from the disease. It has been estimated that increased awareness and screening would save at least 30,000 lives each year. Colonoscopy may also be recommended by your doctor to evaluate for symptoms such as bleeding and chronic diarrhea.

The endoscope is a thin, flexible tube with a camera and a light on the end of it. During the procedure, images of the colon wall are simultaneously viewed on a monitor.

What preparations are required?

Your doctor will tell you what dietary restrictions to follow and what cleansing routine to use. In general, the preparation consists of limiting your diet to clear liquids the day before and consuming either a large volume of a special cleansing solution or special oral laxatives. The colon must be completely clean for the procedure to be accurate and comprehensive, so be sure to follow your doctor’s instructions carefully.

Can I take my current medications?

Most medications can be continued as usual, but some medications can interfere with the preparation or the examination. Inform your doctor about medications you’re taking, particularly aspirin products, arthritis medications, anticoagulants (blood thinners such as warfarin or heparin), clopidogrel, insulin or iron products. Also, be sure to mention allergies you have to medications. 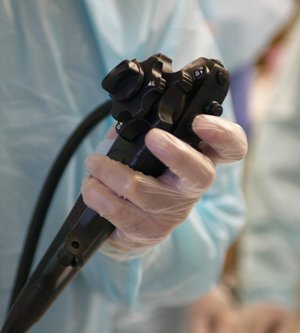 A colonoscope is a medical device used by expert physicians to look inside the colon and rectum. The expert physician controls the movement of the flexible tube using the endoscope handle.

What happens during colonoscopy?

Colonoscopy is well-tolerated and rarely causes much pain. You might feel pressure, bloating or cramping during the procedure. Typically, your doctor will give you a sedative or painkiller to help you relax and better tolerate any discomfort. You will lie on your side or back while your doctor slowly advances a colonoscope along your large intestine to examine the lining. Your doctor will examine the lining again as he or she slowly withdraws the colonoscope. The procedure itself usually takes less than 45 minutes, although you should plan on two to three hours for waiting, preparation and recovery. In some cases, the doctor cannot pass the colonoscope through the entire colon to where it meets the small intestine. Your doctor will advise you whether any additional testing is necessary.

What if the colonoscopy shows something abnormal?

If your doctor thinks an area needs further evaluation, he or she might pass an instrument through the colonoscope to obtain a biopsy (a small sample of the colon lining) to be analyzed. Biopsies are used to identify many conditions, and your doctor will often take a biopsy even if he or she doesn’t suspect cancer. If colonoscopy is being performed to identify sites of bleeding, your doctor might control the bleeding through the colonoscope by injecting medications or by cauterization (sealing off bleeding vessels with heat treatment) or by use of small clips. Your doctor might also find polyps during colonoscopy, and he or she will most likely remove them during the examination. These procedures don’t usually cause any pain. 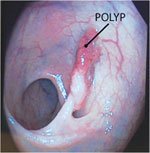 Polyps are abnormal growths in the colon lining that are usually benign (noncancerous). They vary in size from a tiny dot to several inches.

What are polyps and why are they removed?

Polyps are abnormal growths in the colon lining that are usually benign (noncancerous). They vary in size from a tiny dot to several inches. Your doctor can’t always tell a benign polyp from a malignant (cancerous) polyp by its outer appearance, so he or she will usually remove polyps for analysis. Because cancer begins in polyps, removing them is an important means of preventing colorectal cancer.

How are polyps removed?

Your doctor may destroy tiny polyps by fulguration (burning) or by removing them with wire loops called snares or with biopsy instruments. Your doctor will use a technique called “snare polypectomy” to remove larger polyps. Your doctor will pass a wire loop through the colonoscope and remove the polyp from the intestinal wall using an electrical current. You should feel no pain during the polypectomy.

What happens after a colonoscopy?

You will be monitored until most of the effects of the sedatives have worn off. You might have some cramping or bloating because of the air introduced into the colon during the examination. This should disappear quickly when you pass gas. Your physician will explain the results of the examination to you, although you’ll probably have to wait for the results of any biopsies performed. If you have been given sedatives during the procedure, someone must drive you home and stay with you. Even if you feel alert after the procedure, your judgment and reflexes could be impaired for the rest of the day. You should be able to eat after the examination, but your doctor might restrict your diet and activities, especially after polypectomy. Your doctor will advise you on this.

What are the possible complications of colonoscopy?

Colonoscopy and polypectomy are generally safe when performed by doctors who have been specially trained and are experienced in these procedures. One possible complication is a perforation, or tear, through the bowel wall that could require surgery. Bleeding might occur at the site of biopsy or polypectomy, but it’s usually minor. Bleeding can stop on its own or be controlled through the colonoscope; it rarely requires follow-up treatment. Some patients might have a reaction to the sedatives or complications from heart or lung disease. Although complications after colonoscopy are uncommon, it’s important to recognize early signs of possible complications. Contact your doctor if you notice severe abdominal pain, fever and chills, or rectal bleeding. Note that bleeding can occur several days after the procedure.